Ahead of COP27, Open Civic Space and Release Everyone Arbitrarily Detained in Egypt

In the run up to the UN Climate Change Conference 2022 (COP27) taking place in Egypt’s resort town of Sharm El Sheikh from 7 to18 November 2022, the undersigned organizations, groups and individuals note with great concern the human rights situation in Egypt and in particular the government’s restrictions on the rights to freedom of expression, association and peaceful assembly, which risk to undermine a successful, inclusive and participatory climate summit. 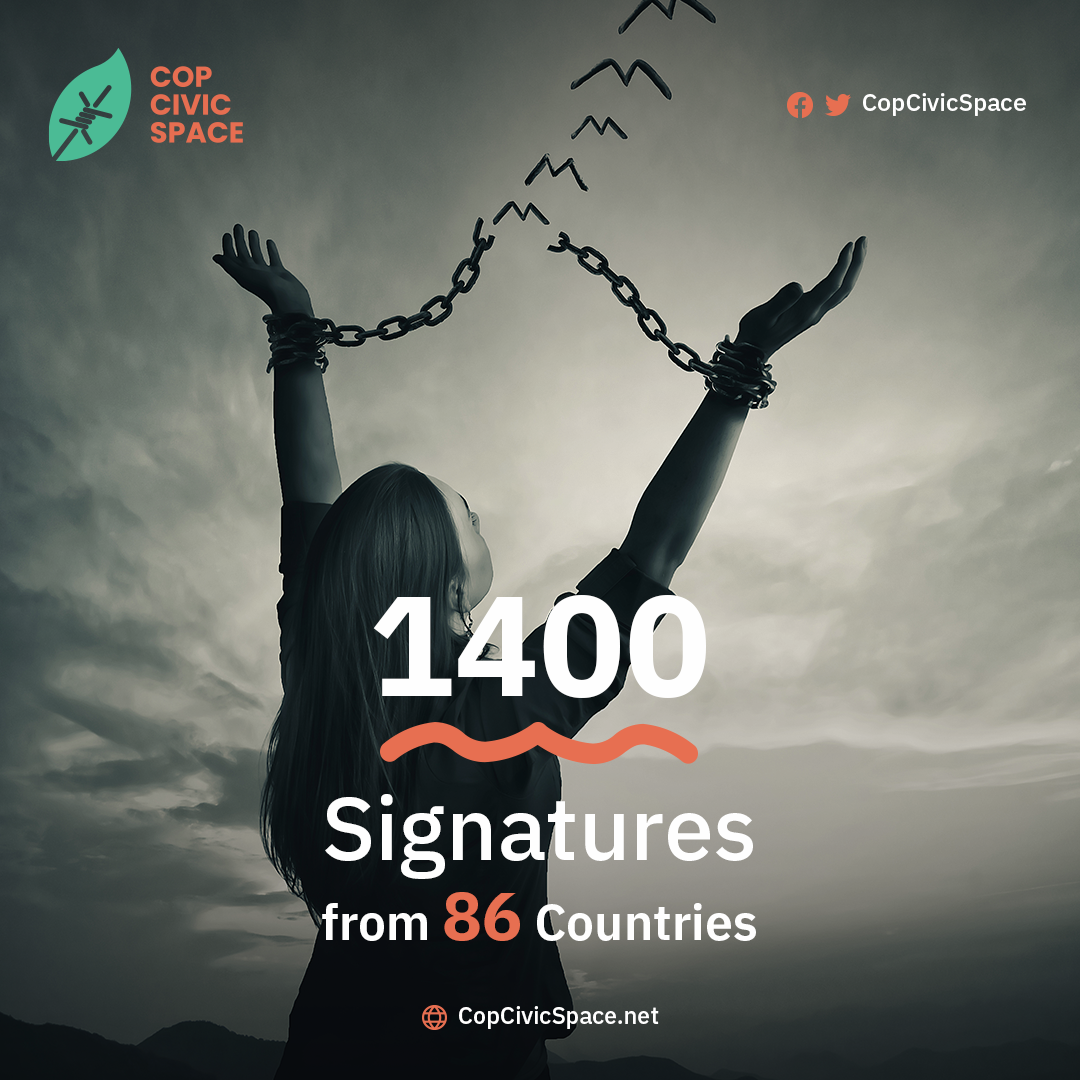 Advancing climate justice demands an inclusive, holistic approach to environmental policy that embeds human rights and tackles systemic problems, including historically rooted social injustices, ecological destruction, abuses by businesses, corruption and impunity, and social and economic inequality. The strongest voices across the world pushing back against these systemic problems, and in favor of more meaningful and ambitious climate action, have come from civil society.

We voice our support to the call made by the UN Special Rapporteur on the rights to freedom of peaceful assembly and of association: that the work of civil society be recognized, publicly and at the highest levels, as essential to the advancement of climate action and just transition. Moreover, we stress the importance of the right to freedom of expression and independent reporting to foster efforts to address the climate crisis.

We emphasize that effective climate action is not possible without open civic space. As host of COP27, Egypt risks compromising the success of the summit if it does not urgently address ongoing arbitrary restrictions on civil society.

We call on Egypt to ensure that civil society organizations, activists, and communities can meaningfully participate in all discussions and activities on climate and just-transition policy development and implementation at all levels of decision-making without fear of reprisals. Authorities must put in place transparent and inclusive processes to ensure that everyone, including women, Indigenous peoples and local communities, workers, youth, children, persons with disabilities, and other groups facing marginalization or discrimination, is provided with equal opportunities to effectively participate in climate decision-making.

Access to information is central to effective participation. To this end, we call on the Egyptian authorities to immediately end the arbitrarily blocking of websites and ensure access inside the country to the hundreds of independent media, human rights organizations and other blocked websites. We also call for the immediate release of all journalists who have been imprisoned solely for doing their job, and an end to restrictions on media and digital spheres.

We recognize that a select number of journalists, human rights defenders, and other individuals who had been arbitrarily detained were conditionally released in recent months. We urge the Egyptian authorities to immediately and unconditionally release all those held simply for peacefully exercising their human rights, implementing criteria set by local NGOs for these releases: fairness, transparency, inclusiveness, and urgency.

Preparations for COP27 are taking place against the backdrop of an ongoing and deep-rooted human rights crisis in Egypt. The Egyptian authorities have for years employed draconian laws, including laws on counter terrorism, cyber crimes, and civil society, to stifle all forms of peaceful dissent and shut down civic space. We note that, under the current government of President Abdel Fattah al-Sisi, thousands continue to be arbitrarily detained without a legal basis, following grossly unfair trials, or solely for peacefully exercising their human rights. Thousands are held in prolonged per-trial detention on the basis of spurious terrorism and national security accusations. Among those arbitrarily detained are dozens of journalists targeted for their media work, social media users punished for sharing critical online content, women convicted on morality-related charges for making Tik Tok videos, and members of religious minorities accused of blasphemy.

Prisoners are held in detention conditions that violate the absolute prohibition of torture and other ill-treatment, and since President Abdel Fattah al-Sisi came to power hundreds have died in custody amid reports of denial of healthcare and other abuse. Egypt remains one of the world’s top executioners, executing 107 in 2020 to 83 in 2021, with at least 356 people sentenced to death in 2021, many following grossly unfair trials including by emergency courts. The crisis of impunity has emboldened Egyptian security forces to carry out extra-judicial executions and other unlawful killing, enforced disappearances and torture with no fear of consequences.

The Egyptian authorities must take meaningful steps to address the human rights crisis, including by lifting restrictions of civic space and ending their crackdown on peaceful dissent.

Ahead of COP27, 1400 groups, parliamentarians and individuals from over 80 countries urge Egypt to open civic space and release political prisoners

Ahead of COP27, 12 Egyptian human rights organizations launched a […]